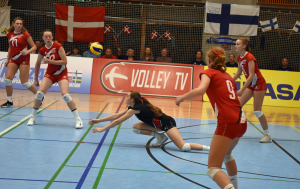 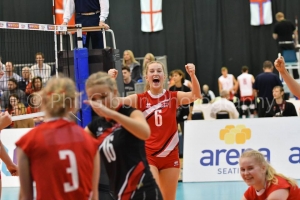 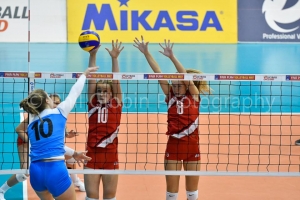 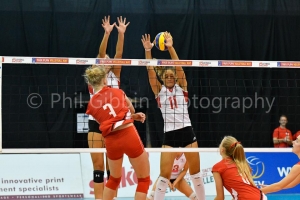 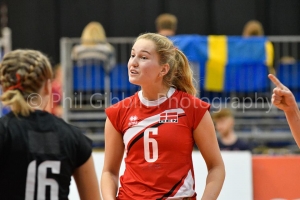 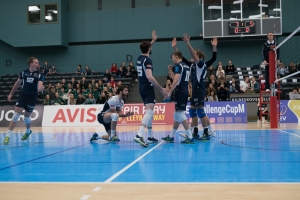 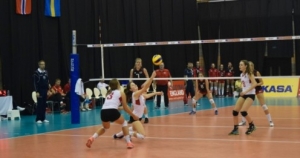 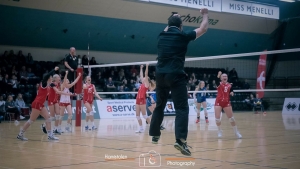 Day 3, Wednesday the 18th of October

NOR-ISL, quarterfinal (1-3): If the two teams had continued the match as the played the two first sets, the match would have continued the rest of the day. But after two very close sets, Iceland showed more showed that they had more will and power left than Norway and won the two last sets with a good margin.
Iceland are qualified for the semifinal against Sweden and Norway will play for the 5-8 place.

FIN-ENG, quarterfinal (3-0): England tried really hard and forced Finland to perform their best. But at the end Finland was the strongest team and won the match with 3-0. Finland is qualified for the semifinal against Denmark, while England will play for rank 5-8.

NOR-FAR, 5-8 (3-1): Norway controlled the match in the first two sets, but the girls from Faroe Islands did not give up and made a fine come back by winning the third set. In the fourth set Norway kept a lead all through the set and finished the match in four sets. Norway will play for rank 5-6 and Faroe Islands for rank 7-8.

ENG-GRL, 5-8 (3-0): England qualified for the 5/6 match against Norway, by winning 3-0 from Greenland.
Greenland will in the first performance at the NEVZA Youth Tournament play for rank 7/8 against Faroe Islands.

SWE-ISL, semifinal (3-0): Sweden and Iceland gave each other a brave fight in the first semifinal. Iceland tried their best to steal a set from the Swedes, but it was enough. Sweden were too strong and qualified in three straight sets for the final. Iceland will play for the bronze medal.

DEN-FIN, semifinal (3-1): In front of a big home crowd Denmark and Finland faced each other in a thrilling semifinal. Denmark started the match on fire and won the two first sets. Finland made a comeback by winning the third set. In the fourth set Denmark put a lot of pressure on the Finnish team in blocking and serving and the set was won by a very happy Danish team. This gives a final between Denmark and Sweden and a bronze medal match between Finland and Iceland.

DEN-ISL, quarterfinal (3-0): The home team from Denmark did not show much hospitality in this decisive match. Denmark won the match in three straight sets are ready for the semifinal against Finland. Iceland will play for the spot 5-7.

ENG-FAR, quarterfinal (3-2):  The Faroe Islands was on the road for maybe the best result ever in a NEVZA U17 boys tournament. But after England had lost the two first sets, they picked up their game and made a strong come back and ended up winning the match. England is ready for the semifinal against Sweden and Faroe Islands will play for rank 5-7.

ISL-NOR, 5-7 (0-3): Iceland and Norway played, despite the fact that Iceland did not win a set, a very close and competitive match. Norway had a bit more momentum at the three set finishes. Both team will meet Faroe Islands Thursday.

FIN-DEN, semifinal (2-3): Both teams refused to give up, in this very exciting semifinal. In the fifth set Finland looked like a winner in front 13-10, but Denmark came back in the match. Finland had one match ball before Denmark took the last point on their third match ball. Denmark will play for the gold and Finland must play for the bronze.

SWE-ENG, semifinal (3-0): In the previous matches Sweden had looked like a very strong candidate for the final. They continued to be that, by playing a very consistent match against the English boys. In the decisive moments Sweden had the most power and experience and won the match in three straight sets. Sweden will face Denmark in the match for the gold and England will meet Finland in the bronze medal match.
Published in U-landshold
Tagged under
Read more...
tirsdag, 17 oktober 2017 20:13

Day 2, Tuesday the 17th of October

FIN-SWE (2-3): The young Finnish team faced a strong and tall Swedish team in the first match of the day. The two teams played on a high level most of the match and proved that both teams are to be considered as top teams of the tournament. The teams needed 5 exciting sets to find Sweden as a winner, in the best girl’s match of the tournament so far.

ISL-GRL (3-0): Iceland had full control of the match in the first two sets. In the third set showed Greenland good serving and put some pressure on the Icelandic girls, but not enough to gain a set. A nice win for Iceland and a great improvement by Greenland.

ENG-FAR (3-0): England qualified for the quarterfinal by winning the match against the Faroe Islands. The teams were quite close in all sets until the middle of the sets. From that point England got the momentum and finished the sets. Faroe Islands will play for the ranking 5-8

NOR-DEN (1-3): The final in pool A between Norway and Denmark, was a very close and exciting match in the first two sets. The last two sets Denmark had a little more power and closed the match 3-1. Denmark is now ready for the semifinal Wednesday at 19.30, while Norway will play quarterfinal Wednesday at 9.00.

SWE-GRL (3-0): Sweden secured the 1st place in pool B, by winning the match against Greenland. Greenland scored the most points in their three matches so far, but it was enough to win a set. Sweden will play semifinal 17.30 Wednesday and Greenland will start playing for the 5th – 8th place at 15.30.

FIN-ISL (3-0): Finland started out as expected, as the leading team. In the second set Iceland had a really good period and took a big lead, but Finland made a nice come back and won the set. The third set was also won by Finland. Both teams will play quarterfinal Wednesday. Iceland against Norway at 09.00 and Finland against England at 11.00.

SWE-NOR (3-0): A well-organized team from Sweden started day 2 in the boys tournament against Norway. Sweden had the momentum most of the match, but Norway also had their moments. By the end of the sets, Sweden was the strongest team and closed the match in three sets.

DEN-FAR (3-0): The first set was quite close between the two teams. But Denmark kept the lead throughout the set and secured a victory in three straight sets.

ENG-ISL (3-1): England won three sets with a comfortable lead, but Iceland showed good team spirit by winning the third set. Iceland is ready for the quarterfinal as number three in the pool D. England will play for the 1st place against Finland in the last match of the day.

NOR-FAR (0-3): Faroe Islands, with four boys from the senior national team squad, was the strongest team in the first set, second and third set, but with the smallest possible difference in favor of Faroe Islands. All sets was won by 2 points and Faroe Islands are ready for the quarterfinal, while Norway will play for the 5th to 7th place.

SWE-DEN (3-0): Sweden were too strong for the Danish team in the final in pool C. Denmark had their changes in the 1st set but missed them and in the last two sets Sweden had the control. Sweden are ready for the semifinal at 19.00 Wednesday and Denmark will play quarterfinal at 10.00 against Iceland.

FIN-ENG (3-2): England started the match on fire and won the first set. The rest of the match continued as a hard battle between the two teams. At the end, Finland was a bit stronger and secured the spot at the top of pool D.
Published in U-landshold
Tagged under
Read more...
mandag, 16 oktober 2017 18:25

(See all the exact results, pictures etc. at https://www.facebook.com/nevzau17/)

DEN-FAR (3-1): The first match of the tournament was between Denmark and Faroe Islands. Denmark dominated the first two sets, but Faroe Islands made a nice come back in the third set, took a lead 19-13 and continued to a set victory. The fourth set had Denmark as the leading team from the start to the finish.

NOR-ENG (3-2): England girls won the first set in this important match in pool A girls. Norway aligned by winning second set. Third set was a real thriller with England as the winner, 31-29. Again Norway came back and the match went into a fifth set. England had their changes in front 14-12, but Norway took the last point to 16-14 and won the match.

FIN-GRL (3-0): This match was historical. It was the first time ever a team from Greenland participated in a NEVZA volleyball competition. To compare, Finland is the most winning country in the NEVZA region. Finland won the match 3-0, but Greenland had a fine debut in the NEVZA family.

ISL-SWE (1-3): During the last years Sweden and Iceland have played some very close matches in the Nevza girl´s tournaments. Today was no exception. The two teams played 4 close sets, but Sweden showed the most experience at the end of the 4th set and took the win 3-1

NOR-FAR (3-0): The second match of the day for both team’s  became a shorter experience than their first ones. Faroe Islands started well in the first set, but Norway came back and controlled the rest of the match. Norway can sleep good tonight undefeated in pool A.

DEN-ENG (3-0): The last match of the day had a lot of nerve. Last year England beat Denmark in the pool in a thrilling tie-break, so both teams were mentally prepared for a long match. Today Denmark was the strongest team, and despite some very good rallies and a good fight, Denmark won in three sets. Tomorrow Denmark and Norway will fight for the 1st place in pool A.

SWE-FAR (3-1): Faroe Islands started the match by winning the 1st set, showing that they have a really competitive team this year. The rest of the match was close, but Sweden showed the most experience and secured the victory with a 3-1 win.

DEN-NOR (3-0): The match started of very equal, but from the middle of the 1st set Denmark raised their level and overcame the good fighting  Norwegian team, with a 3-0 win.

FIN-ISL (3-0): The tournament favorite from Finland lived up to the expectations against Iceland. Iceland did a good job, but the strong Finnish boys had too much power and won in three straight sets.

Tuesday the remaining matches in all pools will be played, to get the teams ready to start the ranking matches Wednesday morning.
Published in U-landshold
Tagged under
Read more...
Side 1 ud af 14